The F-35 Joint Strike Fighter, the world’s only 5th generation fighter jet, is not only critical to our national defense, but it’s good for our state’s economy. With an already booming aerospace and aviation industry, Oklahoma has much to offer and even more to gain with the development of the F-35. The program is gaining traction, in part because is American based, brings in more than $24 million to our state, incorporates five Oklahoma suppliers, and provides hundreds of jobs.

While the program has wide support, Congress is in the midst of determining the funding level for the program.  However, limiting the number of F-35s being produced will actually increase the total cost per plane, costing more money in the long run. On Jan. 15, Senator Tom Coburn appeared on OETA’s Oklahoma Forum to discuss the situation and said, “We can buy F-35s at 10 to 12 percent less than what we’re going to pay for them if we’d just get an order for them all now. You’re going to spend an extra $20 million an airplane by not doing that. Why would we not do that?” 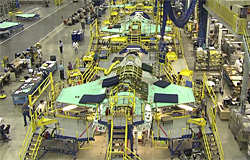 In an Aviation Week article on Dec. 12, Senator Inhofe’s staff commented as well, “Our point is that if you slow down procurement and we don’t get the planes as soon as we otherwise would have, that, number one, exacerbates the tactical fighter gap, and number two, the planes will be more expensive down the road.”

Check out www.f35.com to learn more about this program and make your voice heard.