The Wall Street Journal is reporting this week on the growing “skills gap” that plagues American manufacturers. Even in a weak economy, Oklahoma manufacturers most often cite the lack of available skilled labor as their most pressing concern.

Amid anxiety about the disappearance of factory jobs, thousands of them are going unfilled across the U.S. The number of open manufacturing jobs has been rising since 2009, and this year stands at the highest level in 15 years, according to Labor Department data, The Wall Street Journal story says.

Factory work has evolved over the past 15 years or so as companies have invested in advanced machinery requiring new sets of skills. Many workers who were laid off in recent decades—as technology, globalization and recession wiped out lower-skilled roles—don’t have the skills to do today’s jobs. The mismatch–or skills gap–poses a problem for the economy, stymieing the ability of businesses to increase production and weighing on growth, executives say.

Gary Miller has observed manufacturing’s evolution firsthand. When he started at Ohio-based Kyocera SGS Precision Tools Inc. in 1989, it employed 550 production workers. Despite shedding half its workers, it now produces twice as much, thanks to higher-skilled employees and equipment such as computer-controlled machine tools, which cost as much as $500,000 each.

Mr. Miller, KSPT’s director of training, lives with the skills gap and struggles to find technicians with the electrical and mechanical skills needed to maintain the complex machines. One electrical maintenance role went unfilled for over a year as he searched for someone with an associate’s or bachelor’s diploma, ideally in manufacturing engineering.

“Back 15 years or so, the machines weren’t as sophisticated as they are now,” he said. Having that job unfilled put “a very big impact on our bottom line.”

Click here to read the entire story in the Wall Street Journal. 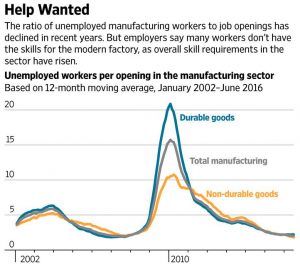 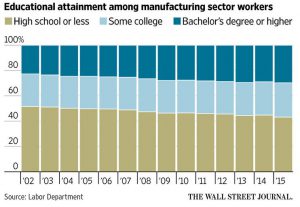 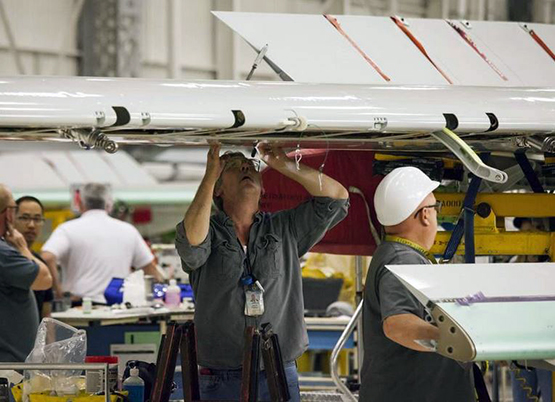 Number of open positions highest in 15 years, with many workers not possessing skills to do today’s jobs. Photo via The Wall Street Journal