The award was presented by the Oklahoma Center for the Advancement of Science and Technology (OCAST) to Rep. Martin on Thursday evening (October 27) in a special ceremony held at the iHub on the University of Oklahoma campus. The presentation as made by Michael Carolina, OCAST executive director.

Rep. Martin was presented the award in recognition of his “unwavering support for common and higher education and for continually supporting robust economic development policies that benefit all Oklahomans,” Carolina said.

The annual award honors an individual who demonstrates a passionate commitment to improving our economy through economic development generally, and technology-based economic development (TBED) specifically.  Award recipients are community leaders who have worked diligently to advance policies and practices to attract, retain and expand new high-tech businesses and jobs in Oklahoma.

“We appreciate the insightful leadership of Rep. Scott Martin in the state legislature,” Carolina said.  “His work this past legislative session helped ensure that research and development efforts to advance new discoveries and technologies continue to be supported on the campuses of our universities and beyond.”

“I am honored to receive this award from our state science and technology agency,” Martin said. “Through the work of OCAST over the past 30 years, groundbreaking technologies developed on our state research campuses have received support needed to advance into the marketplace, which benefits all Oklahomans.”

The Oklahoma Center for the Advancement of Science and Technology is a state agency charged with leading Oklahoma’s technology-based economic development efforts, supporting the efforts of start-ups and entrepreneurs to transform promising innovations from concepts into commercial products. OCAST also is an active supporter of STEM education across Oklahoma’s common education system and provides funding to support internships between local industries and two- and four-year colleges and universities. www.ok.gov/ocast 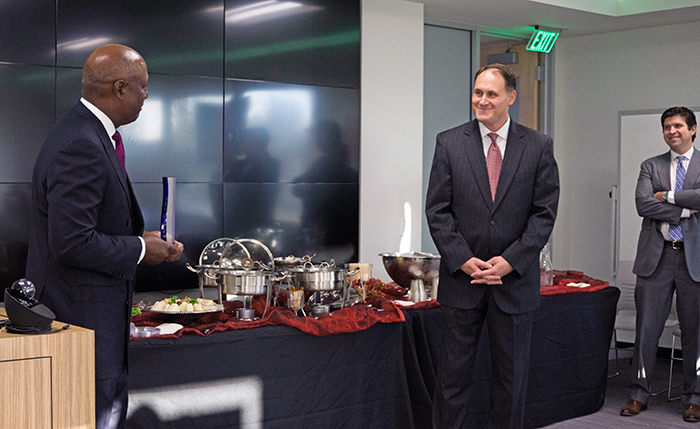