Just how much of an impact is Manufacturing Day (MFG Day) having on students’ perceptions of manufacturing? Cumulatively, the effects over the years have been quite substantial — and continue to trend upward.

Back in 2012, when Manufacturing Day began, we put forth the ambitious goal of affecting the public’s perception of manufacturing with the goal of inspiring more people to pursue manufacturing careers. We wanted to correct the idea that manufacturing involved repetitive, unskilled tasks that happened in dark, dirty factories — a ridiculous idea to anyone who has actually worked in manufacturing — and show people what manufacturing really looks like.

The fact is, today’s manufacturing jobs are highly skilled. Not only that, but they take place in some of the most exciting, innovative work environments anywhere.

The thought behind MFG DAY was therefore: Bring the public to real manufacturing environments and let them see for themselves. What better way to overcome any lingering negative stereotypes than to expose them for the misrepresentations that they are?

It seemed obvious, and all signs pointed to the theory working the first couple of years, but we didn’t have any way to measure the effects of public perception until 2015, when Deloitte became a sponsor of MFG DAY and brought its field research acumen to the initiative.

Deloitte’s initial poll — for MFG DAY 2015 — confirmed what we had always felt and hoped: MFG DAY was moving the needle on public perception in significant, quantifiable ways. Not only that, but the positive statistics got even better in 2016.

Below are some of the highlights from Deloitte’s 2015 and 2016 reports on the effects MFG DAY is having on the public perception of manufacturing — particularly when it comes to student event attendees who haven’t been exposed to manufacturing or are considering manufacturing careers.

To view the official infographics summarizing Deloitte’s studies, take a look at the 2015 infographic and the 2016 infographic. Those who really want to dig in to the data can check out this interactive dashboard of Deloitte’s 2016 findings.

According to Deloitte’s 2015 survey, 81 percent of students who attended MFG DAY events emerged “more convinced that manufacturing provides careers that are interesting and rewarding.”

This percentage rose to 84 percent in 2016. Projections indicate that roughly 600,000 people attended MFG DAY events in 2016 and that 267,000 of them were students. That means that nearly 225,000 students walked away from their MFG DAY 2016 event with a more positive perception of manufacturing, according to Deloitte’s findings.

Not only that, but Deloitte’s survey shows that 71 percent of student attendees both years said that they “were more likely to tell friends, family, parents, or colleagues about manufacturing after attending an event,” meaning that they weren’t just convinced — they were inspired.

To take it a step further, 64 percent of surveyed MFG DAY 2016 student event attendees — up from 62 percent in 2015 — said that they “were more motivated to pursue a career in manufacturing.” Based on the 267,000 student attendance figure, that’s potentially 171,000 new members of a next-generation manufacturing workforce.

While the figures documented in the Deloitte surveys are relatively small compared to the 3.5 million U.S. skilled manufacturing jobs Deloitte and the Manufacturing Institute project will need to be filled between 2015–2025, they’re a start. If MFG DAY keeps growing — and keeps shifting the perceptions of hundreds of thousands of people — each year, the numbers will quickly total in the millions.

The truth is, MFG DAY’s ambitious goals — to change public perception of manufacturing, inspire students to pursue manufacturing careers, and strengthen the future of manufacturing by avoiding the talent shortage on the horizon — can’t be accomplished in a single year, or even in the six years that MFG DAY has been around. These are massive undertakings that require ongoing commitment to realize.

The beauty of MFG DAY is that while the goals are big, the premise is simple. It all starts with manufacturers, schools, and other organizations involved in manufacturing opening their doors to show students, parents, and educators what modern manufacturing is all about.

Ready to join the movement and inspire the next generation of manufacturers? Sign up to host an event today! 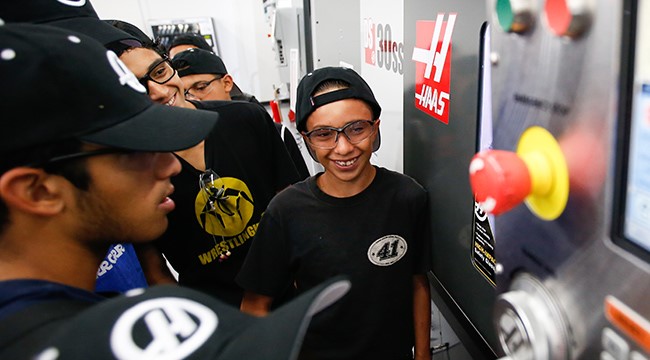