When Terry Hill was preparing to launch his company, there was little doubt what date would be most fitting. He chose Independence Day to officially start his firm, Rapid Application Group. Hill can hardly contain his patriotism when he talks about that Fourth of July in 2017.

“You just can’t get any more American than that,” says Hill, who served 13 years in the U.S. Army as a medical evacuation pilot.

Rapid Application Group has blossomed from a small business started in a humble home office to one of the fastest growing companies in the state. And the only disabled veteran-owned 3D manufacturer in the country. The cutting-edge facility employs a variety of technologies unique to Oklahoma.

Hill’s road to CEO is a patriotic one, shaped by his time in the U.S Army. He notes it was a lifelong dream to serve his country. “I joined the Army because I wanted to be challenged, to challenge others and to be at the tip of the greatest fighting force in the world.”

One November day was a turning point in Hill’s life and strengthened his understanding of the term “mission critical,” which now serves as the backbone of his thriving company.

Hill and his Black Hawk crew were used to harsh conditions on nearly every mission in Afghanistan. When a helicopter lands or takes off, the aircraft’s downwash often blows loose sand or dust into the air, which limits visibility. Among the Army helicopter community, these are referred to as dust or brownout landings and take-offs.

“We were providing an urgent medevac for an Afghan local,” he says, “and unfortunately the conditions weren’t as we thought. What we thought was ground was dust.”

At night and with brownout conditions the helicopter was a few feet in the air. The aircraft rolled a bit and the blades stuck the ground. Hill and his crew were pretty shaken up, but he was back in the Black Hawk less than three weeks later. “There are people out there that need help,” he says. “I can’t look a mother in the eyes and say I couldn’t help her son because of some excuse. I knew I had to get back in the cockpit after the accident.”

It’s this determination and drive that has helped Hill grow his thriving business. While still serving as a pilot in the Army, Hill invented a piece for flight helmets—his first experience with the additive manufacturing process. Early on he knew it would provide a springboard for other veterans who had served their country and were transitioning to civilian life.

Rapid Application now works out of a state-of-the-art facility in Broken Arrow. It features a variety of equipment and includes one of the first figure four standalone machines in Oklahoma, along with a unique wax printer.

After incorporating the Figure 4 platform into its workflow this past August, Rapid Application Group immediately doubled its capacity for small, highly accurate and detailed parts while reducing its time-to-print process by nearly 90 percent. A typical job might be cut from seven hours to 45 minutes or less.

Next year, Rapid Application Group will move into a new 10,000-square-foot structure complete with what Hill describes as an “additive manufacturing center of excellence,” which will be open to the public for tours. Hill already runs a series of additive manufacturing courses for high school students, helping them learn the fundamentals of workflows supporting the end-to-end production of 3D-printed parts.

“We are fortunate to have these kinds of high-tech tools readily available in Oklahoma,” says Jenny Cothran, program director for the Oklahoma Manufacturing Alliance. “Advanced technologies are transforming the face of manufacturing, making it leaner and smarter. To stay competitive, it’s vital that our manufacturers invest in and adopt these processes. Rapid Application Group is a great example of what the future looks like.”

Hill also is helping disabled veterans through a new “Veterans to Additive” program—a standardized certification course that trains vets on the additive manufacturing process. But Hill is not only utilizing 3D printing to positively educate disabled veterans, he is also conducting prosthetics research and prototyping to support disabled service animals.

“It’s the team that has come together to push this dream forward,” Hill says. “We try to give a lot back, especially to the veteran community. It’s a very humbling experience. To be in business for just one year and to become one of the few companies to beta test high-tech equipment is unheard of.” 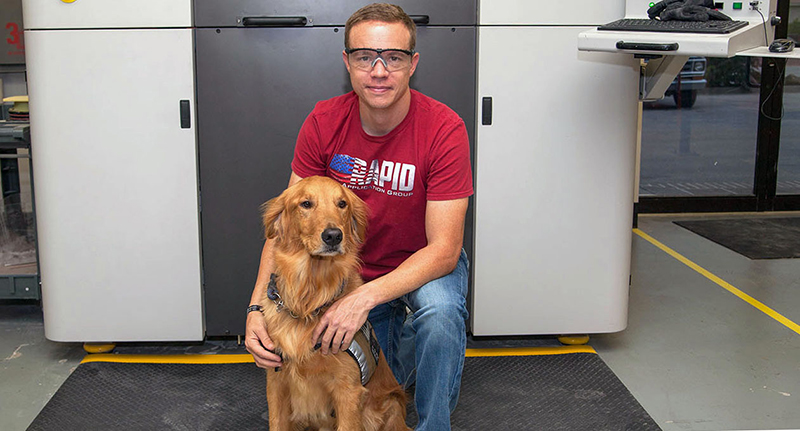 Rapid Application Group has blossomed from a small business started in a humble home office to one of the fastest growing companies in the state. And the only disabled veteran-owned 3D manufacturer in the country. The cutting-edge facility employs a variety of technologies unique to Oklahoma.