What started with a farmer’s dream has evolved into a company that is one of the top competitors in the barbecue market.

“Cookshack was founded by Gene Ellis, a pig farmer, inventor and jack-of-all-trades,” said Stuart Powell, president of Cookshack. “In the early 60s, he invented what eventually became the Cookshack barbecue smoker. Production rose and he was soon producing about 100 smokers a year, mainly for independently-owned barbecue restaurants. The brand was reaching some level of fame since the smokers were sold as a kit along with Ellis’ sauce and spice recipe.”

Ellis soon realized that making the smokers out of his garage was no longer viable or effective. He moved the production to Ponca City where today Cookshack employs about 25 people in their 21,000-square-foot factory.

In 2003, Cookshack began a relationship with Fast Eddy’s BBQ to manufacture a new line of large pit smokers, dubbed the Fast Eddy’s by Cookshack. Ed Maurin has won many championships on the barbecue circuit with his innovative pellet-feed pits. Cookshack added its manufacturing expertise to create a range of smokers.

“Cookshack’s smokers are a fixture on the barbecue competition circuit,” said Powell, who’s been with the company since 1990. “At one time or another, our smokers have been used by the winners of every major competition. That really has helped push our name out into the forefront of the barbecue world.”

The company has grown from sales of about $1 million in 1990 to its current $6 million annually. Cookshack now produces a variety of residential smokers, as well as several models of smoker ovens used by restaurants, caterers, delicatessens, grocery stores, meat markets, and small meat processors.

“Sizes range from home models that cook 30 pounds to the giant commercial models that are the size of an 11-foot cube and smoke up to 750 pounds of meat at a time,” Powell said. The one thing they all have in common is the quality of construction. The units are housed in thick stainless steel that competitors often skimp on. Years of innovation also pay off for the owners. Cookshack smokers are now designed with digital controls, which eliminate temperature spikes and allows for meticulous control of heat.

“Cookshack is always innovating and we always try to stay ahead of the curve,” Powell said. The company is ahead of the curve in wood-pellet technology. It provides a more consistent result, which is perfect for restaurants but great for home use. “It’s more convenient for long cooking times,” he said. “Pellets are the future and we really expect a lot of growth in that product line.”

Over the years, it’s often been a struggle, Powell said. Cookshack overcame many obstacles on its way to the top but still faces many today. “Since Cookshack insists on high build-quality, one recent challenge is a rise in the cost of stainless steel.”

The price has nearly doubled over the past three years, but Cookshack refuses to compromise its product. “It’s what people have come to expect and we have a lot invested in the Cookshack name. We wouldn’t risk that by lowering the quality of our products,” Powell added. The recent rise in transportation costs is also a factor.

Some of that overhead is offset, however, by savings realized through the recent implementation of Lean Manufacturing principles. Doug Taylor, manufacturing extension agent for the Oklahoma Manufacturing Alliance, helped the company through its Lean transformation. Taylor is sponsored locally by Pioneer Technology Center and Northern Oklahoma College. He called on Industrial Solutions, a private consulting company, to help implement change-over projects.

One of the first things Taylor and Industrial Solutions did was rearrange a portion of the shop floor to create flow and reduce waste in the fabrication area. “Our fabricators were like firemen, just making parts here and there to complete a specific unit,” Powell said. “At other times they would just be sitting around waiting for other production to catch up. Now the process is seamless and efficient.”

Cookshack set inventory limits for every common part of every smoker and set fixed locations for common parts. The company created a schedule board segregated by material type for fabrication and designed a Kanban system for initiating production and eliminating outages. Taylor urged Cookshack to have regular team meetings for system troubleshooting of the area. Industrial Solutions conducted training for every Cookshack employee. Another implementation project in the residential assembly area increased production by 61 percent and reduced work-in-process by 90 percent. “When Doug approached me about improving our production through Lean, I was familiar with the concepts,” Powell said. “I had tried it on my own many years ago, but the effort fell flat.”

“There were two keys to our successful implementation this time,” Powell said. “First, middle management was committed right off the bat, so there was no resistance and we were all on the same page. I told them that if we were going to do this, we needed to do it right and follow through with our commitments.”

The second key to success was letting the workers know it was a way of empowering them to make changes. “There was an initial pushback from some people,” Powell said. “They soon realized we were relying on their suggestions to make our production more efficient.”

Powell is quick to praise his dedicated workforce for the success of Cookshack. “Our employees are our greatest asset,” Powell said. “Most key people have been with the company for 10 to 20 years and are very good at what they do. We take pride in making our products in the U.S.A., and in the service that we provide after the sale.”

Powell also credits the Oklahoma Manufacturing Alliance, Taylor and Clay Buford, an OSU Applications Engineer, for his company’s improvements. “Doug and Clay have been an incredible resource,” Powell said. “As we were putting these pieces into place, we really relied on the Oklahoma Manufacturing Alliance to ensure we were doing it the right way. These kinds of big changes are usually difficult for a small manufacturer, but Doug was there to simplify the process.”

Looking toward the future, Taylor put Cookshack in contact with Andrew Ranson of Giant Partners in Oklahoma City. Giants Partners helped Cookshack with a strategic planning process to clarify what it is best at and how the company can best excel at those things. “We believe there is power in clarity and we helped clarify their strengths to help align the company,” Ranson said.

Giant Partners also helped Cookshack examine how it stacked up against its competition. “We looked at three or four of Cookshack’s competitors and determined how the competition thinks,” Ranson said. “By knowing how they think, it is easier to neutralize them and allows Cookshack to better manage their product.”

Through sessions with Ranson, Cookshack now has a better understanding of who it is and how to best move forward in its marketplace.

“They came away with a real-world strategic vision,” Taylor said. “It’s a plan that isn’t in a book sitting on the shelf, but is being implemented every day as the company progresses.”

Everything Cookshack does is ultimately about the barbecue, Powell said. And when it comes to great barbecue, nothing is confidential.

A couple of times a year, the company offers cooking classes and teaches professional techniques. The class is very popular among those that are serious about barbecue and cooking competitions. “We don’t hold back any secrets,” Powell said. “We are upfront about what we do and how we do it…the professionals know that it is not the equipment that makes them successful. But they’ve come to realize Cookshack smokers allow them to do what they do better.” 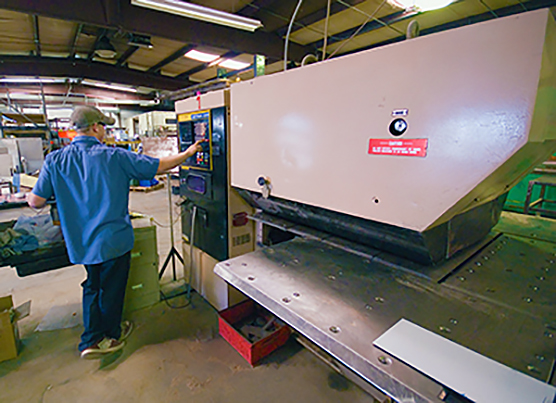 It’s a Sooner State tradition. As summer temperatures rise, folks will gather with friends and family for an Oklahoma-style barbecue. The best chefs (and those backyard wannabes) looking for the highest quality equipment turn to one place—Cookshack. The Ponca City manufacturer has provided top-of-the-line smokers to barbecue lovers for nearly 50 years.