A sister company to Centek Limited in Great Britain, Oklahoma City’s Centek Inc. was established in 2012 to help distribute the manufacturer’s uniquely-designed centralizers.

“The company had developed a very innovative design for a casing centralizer used in the oil and gas industry. It helps ease the casing down into the wellbore and give it good standoff and good centralization,” says General Manager John Carnuccio. “In Oklahoma City, we’ve seen significant growth in a very short period of time as the product caught on.”

The company was built with excellence in mind. Understanding that achieving and maintaining excellence is an ongoing journey, it built its operations with Lean Manufacturing as a core tenant.

“We started up with the concepts of Lean Manufacturing, having a culture of teamwork,” says Carnuccio. “The idea was to have a very people-centric company. In other words, a company where people felt they were part of something good.”

With Centek’s forward-thinking attitude and willingness to adapt, it reached out to manufacturing extension agent Kevin Barber. Barber is one of 17 MEAs working throughout the state to grow industry. He is sponsored locally by Francis Tuttle Technology Center.

“Centek is a very serious company when it comes to training and we do appreciate partnering with them,” says Fernanda Hagen, and industrial coordinator with Francis Tuttle. “We appreciate training because that’s the most important piece in order to develop the workforce and to retain their workforce as well.”

Key adds, “Our relationship with Francis Tuttle and the Oklahoma Manufacturing Alliance has allowed us to train approximately 90 percent of our employees, send them through a Lean 101 introductory course … and about 30 percent through a Leadership Development Academy where we have put not only the managers and supervisors through, but also those young emerging leaders—the ones we see leading Centek into the future.”

Carnuccio takes a look at those future leaders and is optimistic about the manufacturing industry.

“Everywhere you go, everything you do is with things that are manufactured, and taking raw material and adding value and converting it into things we can use to make our lives better,” says Carnuccio.

“It is critical to our success globally,” Barber adds.

With the mantra, “Excellence to the core,” Oklahoma City’s Centek is doing its part to ensure that vision becomes a reality. 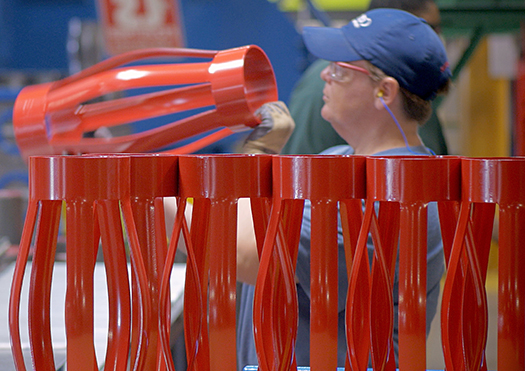 Centek has developed an innovative design for a casing centralizer used in the oil and gas industry.